Round 2 - Robertson Cup Playoffs Kick Off at The Colisee 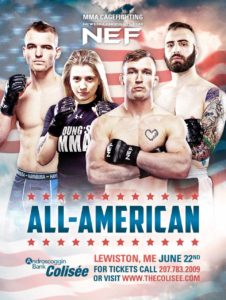 New England Fights (NEF) returns to the Androscoggin Bank Colisee on Saturday, June 22 with its next mixed-martial-arts event, “NEF 39: ALL-AMERICAN.” Earlier today, the fight promotion announced the full fight card for the event.

In the main event of the evening, undefeated Josh Harvey (6-0-1), the reigning NEF Featherweight Champion, is set to defend his title against Indiana’s Jordan Downey (5-4). Harvey, widely considered the hottest 145-pound prospect in the northeast, has earned all six of his victories by stopping his opponents in the first round. Downey, meanwhile, has won his last two-fights-in-a-row and has won four out of his last five.

In the co-main event, Auburn’s own Jesse “The Viking” Erickson (9-7) returns to action for the first time in over a year when he takes on New Hampshire’s Dylan Lockard (5-1) for the vacant professional lightweight championship. Erickson, training out of Central Maine Brazilian Jiu-Jitsu, is looking to continue his winning ways after he went up two weight classes to submit Mike “The Mustache” Hansen (5-9) the last time that NEF visited Lewiston in February 2018. A perennial title contender, this will be Erickson’s fourth attempt at capturing the lightweight strap. Lockard, who represents the Professional Martial Arts Academy, is a top prospect on the New England regional scene. He was a 2010 state champion wrestling for Timberlane Regional High School in Plaistow, New Hampshire.

Keegan “The Flu” Hornstra (4-10) is back on June 22nd when he takes on Dom “Domnation” Jones (1-1) at a catchweight of 160-pounds. Hornsta most recently defeated Zenon “K-Bar” Hererra (1-8), while Jones will be fighting for the first time in two years.

In amateur title action, Nate Boucher (4-3) will finally get his long-awaited second shot at capturing NEF gold when he contends for the 125-pound belt against Ohio’s Robert “The Warrior” Presley (5-4). Boucher rebounded from a three-fight losing skid by submitting his last two opponents in under a minute apiece.

In what will be just over a year since she made her debut, undefeated female flyweight prospect Glory Watson (4-0) from Young’s MMA will contend for her first title when she takes on Caree Hill (4-1) from Team Quest . Watson has quickly cleared the field in her weight class and is on the cusp of turning professional, but before she does she will face her toughest test to date when she meets Hill, who trains at the world-famous Team Quest in Oregon.

In total, 16 full-contact mixed martial arts bouts are scheduled for the evening.

“Once again, we’ve pulled out all the stops to bring NEF fans the fireworks early this summer,” stated NEF Matchmaker and co-owner Matt Peterson. “We’re flying in competitors from all over the country to make sure that ticket buyers get their money’s worth. 16 total fights and four title bouts hotter than BBQ all make for one unforgettable summer night. It all goes down June 22nd—join us!”

“NEF 39: ALL-AMERICAN,” will take place on Saturday, June 22, 2019 at the Androscoggin Bank Colisee in Lewiston, Maine with a bell time of 7 pm. Tickets are on sale now at www.TheColisee.com.


Warning: count(): Parameter must be an array or an object that implements Countable in /home/customer/www/thecolisee.com/public_html/wp-content/plugins/event-calendar-wd/views/related_events.php on line 2